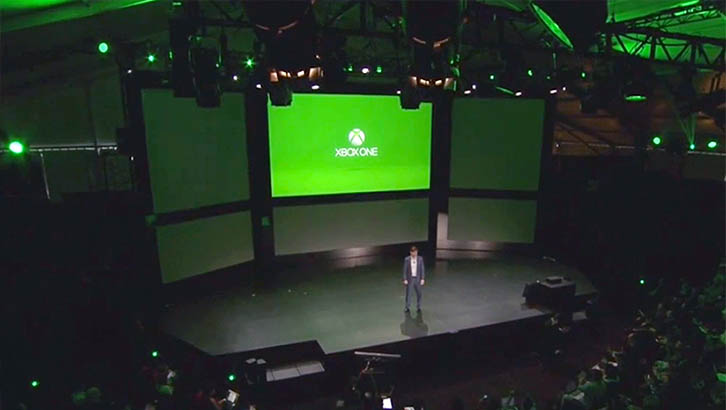 Microsoft unveiled the Xbox One during a special web-streamed event today and I watched it. Here’s my expert feedback on what was said, or rather what wasn’t…

So given the fairly extensive news-style coverage I gave to the PS4 announcement event back in February, I thought I’d feedback on today’s Xbox equivalent more casually. Keep it light, more informal. Loosey-goosey ok?

It’s fair to say I come from a PlayStation-bias here, but I should make a point attacking both to provide some balance. I wasn’t blown away by either or even significantly impressed I must admit. The Sony one felt more grandiose and was certainly longer, but these Apple-style keynotes are all fairly torrid.

What many forget is that being so public these days, beamed worldwide, these events are advertisements. It marks the start of the sales pitch, bombarding us with slick but quite naff soundbites to reel us in. They often say a lot but tell us the bare minimum to prick our interest, or interest our… yeah.

The first point being, it’s all about hyperbole and corporate illusion designed to tempt suckers like me to write Tweets and blog posts like this. There was a barrel, officer, some fish were involved and I definitely heard gunshots.

“Hopefully the PS4 will look exactly like an FM Towns Marty as an ironic dig.”

Anyway if the most memorable things from the PS4 party was a Share video button and Gaikai streaming, then this Xbox shindig can defined by lame names and TV. At least Microsoft went further than Sony by showing us the device for starters. Granted the thing is a dead ringer for Philips‘ bizarre 1991 console the CD-i, but hey. Hopefully the PS4 will look exactly like an FM Towns Marty as an ironic dig.

So yeah, the name. Pre-event rumours set the bar low with ‘Infinity’ and the obvious ‘720’, but Microsoft has skilfully limbo-danced under that with Xbox One. Hmmm… So how exactly is that better than just going with Xbox?
Weird. I mean, if they are worried about people being confused can’t they trust us enough to mournfully point at the most expensive box? Everyone will call it the “new Xbox” anyway. Intelligent verdict: It’s a wank name.

What followed thereafter was kind of confusing, summing up the whole of the remaining event. It was mostly about TV and clearly Microsoft views the console as an entertainment hub. An alarming amount of fuss was made of voice control to switch channels and rich internet-enabled Picture-in-Picture TV services. This was tied into another purveying theme, being sports and some big licenses with American sports broadcasting. “Woo-hoo Yeah! Go Bobcats!”

In defense here, frankly anything designed to make US sports and particularly NFL more engaging should be congratulated. Sadly though any TV tie-ins for American Football, or as I like to call it ‘Pussy Rugby’ (which I have played of sorts), certainly won’t translate here in the UK. So unless we get the equivalent partnerships between Sky, BT Sport and the Premier League at launch it won’t help to sway skint consumers.

“It seemingly took ages for this, a gaming product unveiling, to talk games in any depth and stick with it.”

The sports TV stuff then segued into exclusive deals with EA’s popular games portfolio such as FIFA. However it seemingly took ages for this, a gaming product unveiling, to talk games in any depth and stick with it. Sequences for titles like Call of Duty Ghosts, Forza Motorsport 5, Beat ‘Em & Eat ‘Em HD etc didn’t feature gameplay but pre-rendered cutscenes. Don’t these always look impressive on any console platform?

Just when you thought you were getting to the choice gear, they pipe in Steven Spielberg to talk Halo. Cue fervent wetness until it emerges we’re talking about a live action TV series. Big-budget telly shows you can watch on your new big-budget set-top telly box.

In all seriousness I suspect the console will be WAY better than what this surreal showing let on. They’ve told us to expect more info at E3 and I expect the negative initial reaction, which includes soaring Sony stock prices, will galvanise Microsoft’s strategy.

NOTE: If you missed it or wish to endure the ordeal again then Gamespot (bless ’em) has extensive video coverage. Watch it then PLEASE leave your comments below!