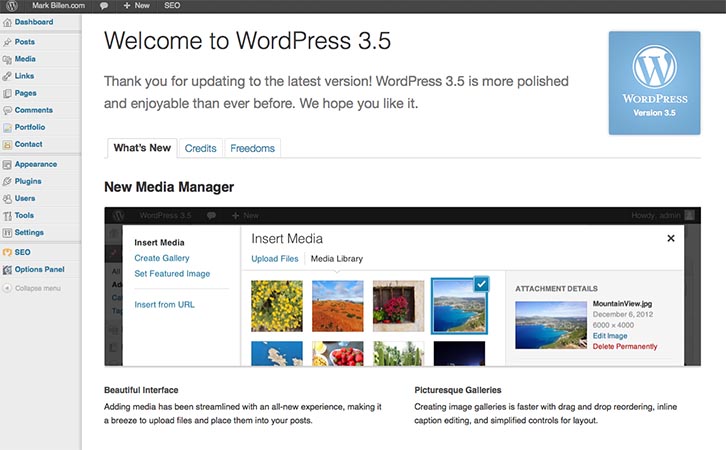 WordPress 3.5 or “Elvin” has now launched with a new media upload client, retina display support, a new theme and some nifty developer tools

The new WordPress 3.5 update, named by the developers as “Elvin” (in honour of jazz drummer Elvin Jones) is now available to bloggers. Key enhancements relate to the media upload facility, which has always been a bugbear for adding pictures, photos and compiling galleries. The default method is now drag and drop based and feels distinctly ‘Apple’ in terms of intuitivity. It seems to work more quickly and robustly, while an array of bigger thumbnails provides a handy summary of available media. You can pick images and apply basic insertion details in situ which should speed editing workflow.

Elsewhere there’s general rendering support for retina displays, with the promise that this should be the most aesthetically pleasing WordPress yet. Most of that will depend on your content of course, but the backend dashboard should look far sharper on those devices targeted. Certain UI components here have also been tweaked such as colour pickers etc so its nice to see these niggles filtered into the update cycle.  Rest assured though that the general dashboard layout remains wholly identical so you shouldn’t have any unwanted surprises.

For novices a fresh ‘Twenty Twelve‘ default base theme arrives offering a clean and mobile responsive solution out of the box. Meanwhile, developers should enjoy the ‘switch_to_blog()’ function for multisite work, a new Tumblr importer and a whole host more.

It can be confirmed that Mark Billen.com is now proudly powered by WordPress 3.5 and we would certainly endorse users to make the switch. Just remember to first back up your database and deactivate those plugins kids!

@YankGeordie Only #NUFC would be criticised AHEAD of what is certain to be a wholly fictional takeover bid. Perhaps… https://t.co/Sj8Lfv8rPb
- Monday Jan 27 - 9:05pm