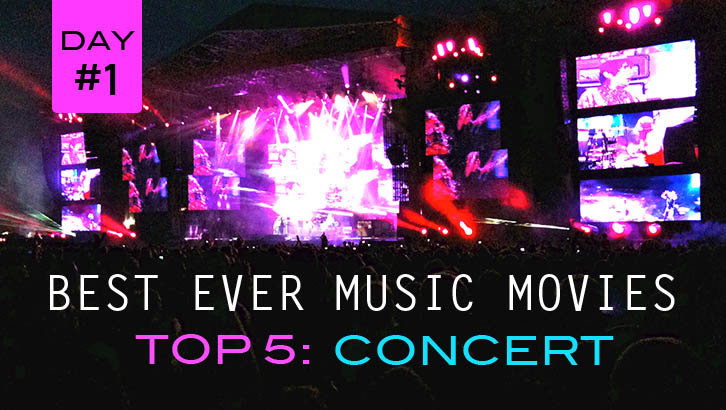 Yeah so in keeping with the theme sparked off by Shane Meadows’ new rockumentary on the reformation of the Stone Roses, I thought I’d look back at a few music-themed favourites. With so many to choose from spanning so many styles within the genre itself, we’ve divided them up over five key categories and providing one top pick plus four essential others. We kick off today with Concert Movies, and will follow with Documentary, Dramatisation, Artistic and finally Comedy. With each one I’ll offer a quick definition of how I’ve classified them, so hopefully you’ll sympathise with the choices made!

Definition: Those music movies that tell a story of live performance and traditionally revolve around a specific, milestone gig within a band or artist’s career.

This 1976 classic from directors Peter Clifton and Joe Massot focuses largely on Led Zeppelin’s legendary 3-night stint at New York’s Madison Square Garden. Despite numerous creative struggles on the project, it’s release was significant at the time due to a concerted prior lack of any televised Led Zeppelin performances and the insatiable appetite for live tickets. Giving every fan the chance to enjoy the band on a big enough screen and crucially with sound capable of conveying their power seemed like a no-brainer.

However, an often blatant lack of coherent direction left many critics and fans alike somewhat bemused. Bizarre dramatic sequences including Robert Plant rescuing a medieval maiden and Jimmy Page transforming into a wizened Tarot Man, are thrown without explanation or narrative against press coverage and a live setlist.

“Essential for fans, this is a cult classic which has matured and grown in terms of significance and innovation over the years.”

Thankfully the on-stage sections are plentiful and both look stunning and sound awesome, especially on HD Blu-ray versions. If you needed any convincing of how dynamic and exciting Led Zeppelin were live, they are beautifully captured here at the height of their powers. Essential for fans, this is a cult classic which has matured and grown in terms of significance and innovation over the years.

For me, The Song Remains The Same is the best example of a concert film rather than a typical rockumentary. The decision to create often psychedelic vignettes for each member of the band, woven between live performance probably reveals more than any to camera interview could. Yes, it’s all very 1970’s and pretty amateurish by today’s standards but in doing so provides a perfect document of a more hedonistic and experimental time.

Essential others:
2) Woodstock – Most noted for Jimi Hendrix’s iconic set, this 1970 film by Michael Wadleigh is so much more with a bill of performers subsequent generations could only dream of.
3) Gimme Shelter – Four Months after Woodstock the Rolling Stones played a free concert at Altamont which ended in tragedy and Gimme Shelter captures this watershed moment on celluloid.
4) Michael Jackson’s This Is It – A concert film for a concert that never happened, this 2009 film by Kenny Ortega edits rehearsal footage to compile a posthumous set-list for a deceased icon.
5) Nirvana: Live at Reading – Bit of a cheat this as it’s literally just the 1992 set in full, but it feels like a documentary piece all the same with so much symbolism and mystique surrounding Kurt Cobain’s performance.