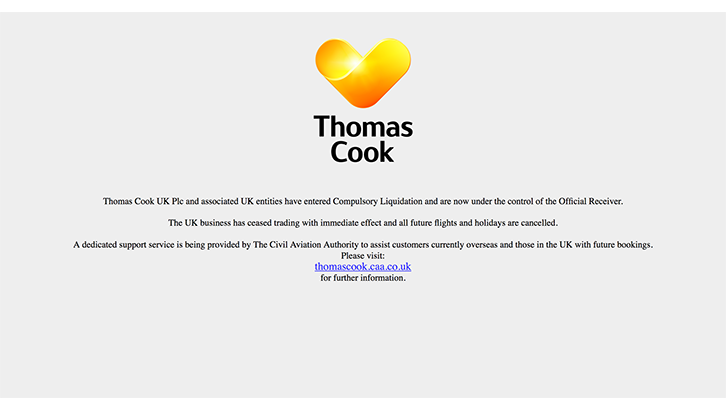 Did the beloved package holiday company become the Sony Walkman of the contemporary travel market?

It was announced this morning that the troubled travel company Thomas Cook officially ceased trading. Debt-ridden and facing an uphill struggle to stay afloat, the news has provoked sadness, outrage and confusion – with holidaymakers forced to board repatriation flights just to get home.

Hundreds, thousands others now face up to the sobering challenge of an ATOL struggle to claim refunds, where covered. Stories of planned trips abroad for weddings, honeymoons, even personal pilgrimages to scatter ashes in the Canary Islands; all thrown into chaos. Staff too are naturally distraught.

Some say the now fading UK
summer is a culprit – it was just too hot at home.

But how did it get to this? The speculation has started, the finger pointing no doubt fixated on anyone or anything other than the top brass. Some say the now fading UK summer is a culprit – it was just too hot at home. Add to this the hype around Brexit uncertainty and the word was “angel” investors preferred a “staycation” as much as customers.

However, the truth is never quite so simple and much more nuanced. Thomas Cook was in the center of a perfect storm, a long drawn out spell of turbulence that its 100+ fleet of Airbus and Boeing planes either didn’t see coming or chose to ignore. The roots of the problem are in this blindness, this complacency and a failure to innovate, to zoom into bright new horizons.

When the times were good,
Thomas Cook couldn’t see the cloud for blue skies

Like so many before, a fond highstreet brand has been left behind. When the times were good, Thomas Cook couldn’t see the cloud for blue skies – failing to embrace online trends fast enough. How consumers dream, plan, find, organise, share and of course purchase holidays has changed without recognition. It was already the case half a decade ago when Fankhauser said, well… “fanks Thomas” and signed gleefully on the dotted.

Why is it that given its market placement, build around a brand awareness dating back initially to 1892, Thomas Cook didn’t see Airbnb coming? When it became a merged PLC with the MyTravel Group in 2007, the website that would change travel buying completely was a year away. Since then we’ve seen names like Agoda and Trivago emerge and thrive – the latter posting scorching 2017 revenues of €1.35bn.

Sure, Thomas Cook is an operator and the margins are getting slenderer than Borat’s mankini. But the market IS there and unfurling its once considerable beach towel over the online lounger, in all forms, needed to happen sooner.

Update: A dedicated support website at https://thomascook.caa.co.uk/ has been setup to give customers both at home and abroad necessary guidance on the implications given today’s announcement.