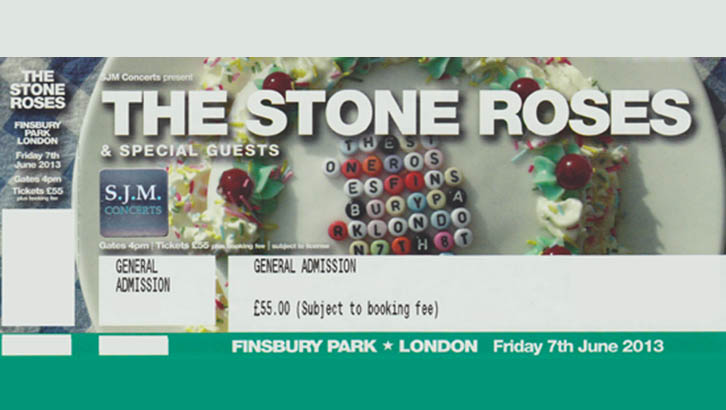 I was pleased to see my Stone Roses ticket arrive for Finsbury Park next June, but with reluctant acknowledgement that hopefully this show is amongst the last…

Thankfully my ‘reassuringly expensive’ ticket for The Stone Roses at Finsbury Park in June 2013 plopped through my letter box today. It will be the band’s first major headlining event in the capital since they reformed and I’m sure fans have flocked in their thousands to snap them up.

I have been a pretty insanely loyal fan of The Stone Roses for many years and still believe them to be one of the best of all time. Although staunchly against their unlikely reformation for numerous reasons, I simply had to relent and head up to Manchester’s Heaton Park earlier this year to see the big comeback. They did not disappoint, don’t get me wrong, but time has definitely moved on and the show only proved the magic that made them so special has sadly faded.

Fervent fans like me feel obliged to follow them like a football team and few will dare criticise. However The Stone Roses were so much about the optimism and energy of youth that to try and recapture that now feels wrong. Their public blow-up and dissolution in the mid-1990’s only served to cement the mystique, while the annual denials of a reconciliation were stubbornly characteristic. They were sufficiently still young enough to realise that such a move, while doubtlessly lucrative, couldn’t avoid being detrimental to their creative legacy.

“But let’s face it, they don’t have the best track record of getting down to business and well, putting track to record.”

The band insists it won’t merely be a “trip down memory lane” but a chance to record and release new material. But let’s face it, they don’t have the best track record of getting down to business and well, putting track to record. Perversely it is the notoriously slim catalogue of output that makes The Stone Roses so fascinating.

We’ll learn more when anything new surfaces, and perhaps Finsbury Park will be the best chance yet to debut fresh tunes. I’ll still be looking forward to it and can’t wait to catch the Shane Meadows documentary film in 2013, plus a Stone Roses Heaton Park concert Blu-ray would be welcome too.

I was about to say I hope they don’t stick around for too long as a merciless cash cow, but why should they when fans like me remain keen to keep shelling out??