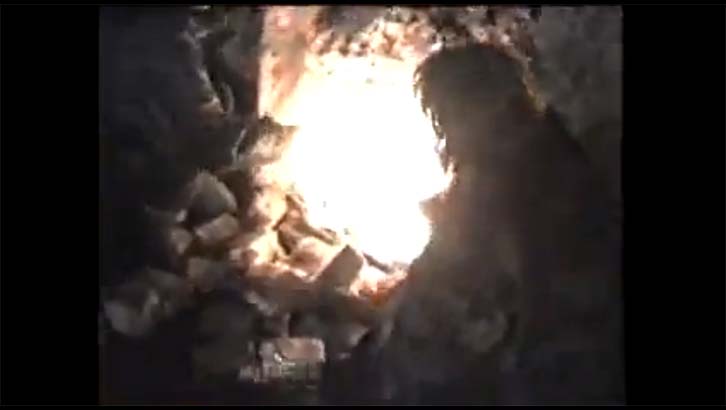 Believe it or not, 20 years ago two of the UK’s best-selling pop stars set fire to one million pounds of personal royalties. Stupidity? Selfishness? Or possibly the single most powerful work of conceptual art ever?

Needless to say, from the very outset I have come to believe it’s the latter. In fact I think there’s a brutal purity to what Bill Drummond and Jimmy Cauty did on August 23rd 1994 that puts subsequent elevated and wealthy modern artists to shame.

I’m talking of course about The K Foundation, formerly chart-topping duo The KLF, who decided to burn £1m sterling. All in the name of artistic endeavor, one assumes. Just think about that idea and everything attached to it for a minute. Yes and by all accounts and reasonable levels of verification it actually happened. They withdrew the cash, flew a plane to the Scottish island of Jura, lit a fire and fanned a suitcase full of new £50 notes into the flames. The act lasted little over an hour and was captured on videotape, eventually shown as the film Watch the K Foundation Burn a Million Quid. They would eventually press the world’s most expensive house brick from the ashes – quite possibly in homage to what each felt in the trousers department on the night in question.

For those intrigued, the whole backstory can be readily found online so the purpose of this article is purely to offer a retrospective re-evaluation. Thoughts on why they did it, the way I understand it and indeed why I believe it deserves begrudging respect. At least I think that’s what I think about it… Yeah.

In many ways the act itself speaks volumes about the surprising ease with which the money was earned. The KLF was as much a satire on how straightforward it was becoming to release hit singles. The band, albeit in Timelords guise, literally wrote the rule book on producing number one records “The Easy Way” with 1988 book The Manual. Whether the duo’s outlook on music making was wholly this cynical is unclear, however it could explain a disposable, flippant attitude toward the resultant earnings. “If it was that easy to plunder a gullible record buying public, we could surely pull the same trick again should the wife get sick?” They might have cackled in a moment of unguarded evil.

“It seems tough to imagine two people so ready to reject and destroy all trace of success would be driven by long-term profit, at any cost.”

There was of course a similar question mark at the time over any genuine artistic motive. It could have been a publicity stunt merely to promote future product, despite vehement denials of any subsequent KLF output. Had they not already retired, the band could have stood to make more money from the notoriety, a notoriety so low-key and yet potent enough clearly to resonate today. However it seems tough to imagine two people so ready to reject and destroy all trace of success would be driven by long-term profit, at any cost.

My own feeling is that The K Foundation were dealing in gestures more powerful than they themselves fully understood. When you keep pushing yourself too far and it comes off you inevitably start believing you can’t fail. After the event you can’t go back and they didn’t think enough about how burning a million pounds could change them as people. The reactions of a largely shocked and negative public must have fed back and undermined whatever Cauty and Drummond told themselves to justify it as worthwhile.

The pair would therefore struggle to breach the pivotal barriers of a public that couldn’t relate. The issues of giving the money instead to charity, jealousy and more moralistic, even religious concerns would totally overshadow any wider debate. That said, these things are precisely what make the act so potent and beguiling in the first place. They are really the only reasons why it would pique the interest of the man in the street. If you’re not trying to do that, and public art still courts publicity, then what’s the point? There are cheaper ways to heat up a derelict boathouse after all.

What’s more they didn’t reckon on the weight of public perception. Rightly or wrongly, probably today more than ever, people fetishise £1m to biblical proportions. That golden figure, the maker of millionaires, the members only card to everyone’s hopes and dreams – surely? So to subvert that and reduce it merely to ash is tantamount to murder, or at least suicide. You might still look into the eyes of Bill Drummond and Jimmy Cauty with the same unshakable sense of horror normally reserved for a Peter Sutcliffe or Myra Hindley. An all-consuming act consumes the actor.

Indeed observing the film Watch the K Foundation Burn a Million Quid today is an eerie experience along those same lines. The shaky VHS camerawork of friend and collaborator Gimpo befits the unceremonious way in which the thing is played out. Its sense of bleakness is breath-taking, at once compelling, mundane and unwatchable for so many indefinable reasons. Again this is a snuff movie where nobody and everyone dies at the same time. In today’s terms it has been watched a paltry 4.8k times on YouTube – although if there’s a more thought-provoking clip to be found on there I can guarantee it won’t have the production budget.

“Its sense of bleakness is breath-taking, at once compelling, mundane and unwatchable for so many indefinable reasons.”

So why should you care or bother watching it, what does it say today if it ever said anything at all? My own poetically non-committal answer is that it says so much it defies words. Rather than exclude instinctive gut reactions, criticisms or intellectual reasoning, embrace them all. Art shouldn’t dictate how you receive or interpret it and its only true value is in the honesty of the artists behind it. For me though I can’t recall feeling as intoxicated, repulsed, excited or perplexed by a contemporary art statement as this. In a world where taboo is virtually non-existent can you imagine anyone doing it now? Frankly, no. It is as shocking to read, imagine, watch and write about today as it was 20 years ago and that’s no mean feat.

But would I do it? Hell no, of course I wouldn’t. I’ll leave that to the (poor) artists – and god bless them for it!