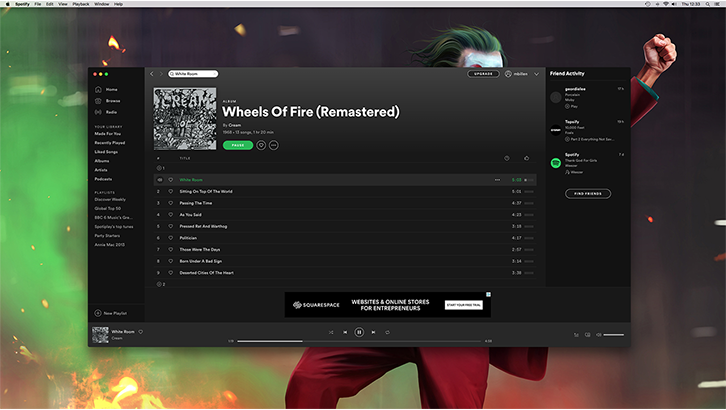 CONTAINS SPOILERS –This article, after the first two paragraphs, does describe a few key plot points from the movie, so you may prefer to read after watching the film.

Ok so Todd Phillips’ Joker isn’t merely a beautifully shot film, but it also boasts a wonderful score and a pretty interesting soundtrack. It has in fact faced criticism for its use of Gary Glitter’s “Rock ‘N’ Roll (Part 2)” due to the obvious controversy around the artist. Glitter, real name Paul Gadd, was a multi-million selling pop star through the 70’s and 80’s but was later convicted of sex offences. The public worry was that he would receive royalties from Joker, with Warner Bros quick to claim the contrary given that Universal Music owns the publishing. [Worth noting that the KLF’s sampling of the same song for its 1988 smash hit “Doctorin’ the Tardis” pre-dated Glitter’s criminal charges by over a decade.]

But for me anyway, the most intriguing choice of all is “White Room” by English rock trio Cream.

Those issues aside, the film’s soundtrack is packed with gems including Frank Sinatra classics such as “That’s Life” and “Send In The Clowns” – for obvious thematic reasons. But for me anyway, the most intriguing choice of all is “White Room” by English rock trio Cream. The song was recorded in 1968 for the band’s album Wheels of Fire and of course featured the musical talents of members Jack Bruce, Ginger Baker and notably, blues guitar legend Eric Clapton.

It was my reading immediately that “White Room” was a reference to where he was now inevitably heading.

As a fan of Cream’s music, I was immediately struck by its use in Joker and in fact found it’s sequencing quite profound. The track plays during a final act scene were the titular character has seemingly been arrested; we see him with head pressed to a police car’s interior window as he witnesses the ensuing “clown riots” in Gotham’s broken streets. It was my reading immediately that “White Room” was a reference to where he was now inevitably heading. Captured and committed, his fateful appearance on the Murray Franklin show would surely result in solitary, probably padded, confinement. In fact, the film had earlier depicted Arthur Fleck, again with his head hitting glass, institutionalised in a starkly white room.

So that was that, or so we thought? Because I found the next sequence incredibly jarring and almost dreamlike, which wouldn’t be too out of step for the movie’s cunningly unreliable narrative. Joker is seemingly “saved” and knowingly so, when a truck crashes the cop car before anonymous clown-masked rioters pull him unconscious from the wreckage. It’s almost allegorical, with biblical symbolism – his disciples rescuing their icon’s body for miraculous resurrection. Joker, laid out resplendent on the car’s hood, slowly revives and rises triumphantly as the cheering hoards rejoice. [Observation afterthought – why wasn’t he handcuffed?]

Was this sequence merely Joker fantasising about being in fact saved and exulted, finally?

My feeling, on reflection of only one viewing I might add, is that “White Room” is an important clue here. Was this sequence merely Joker fantasising about being in fact saved and exulted, finally? Already locked up “In the white room with black curtains near the station” rather than in fact freed? [Ok so curtains are a suicide watch faux pas, but you get the point…]