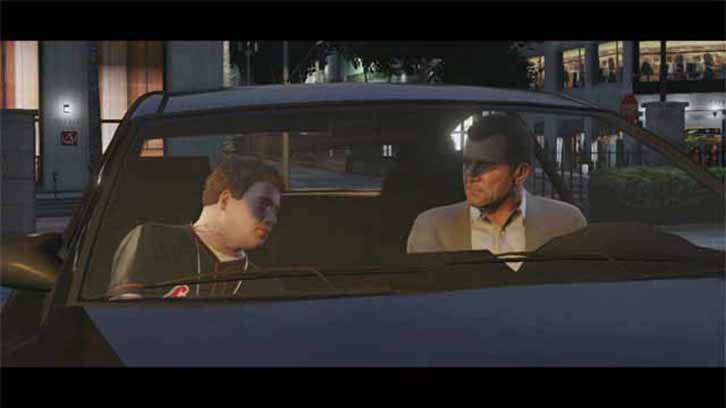 So Rockstar has finally aired the Grand Theft Auto 5 Trailer 2, and if our appetites weren’t whetted enough already this should certainly do it. We have a look through the most exciting clues for the eventual release.

Originally scheduled to go live at the beginning of November, this official Trailer 2 was in fact delayed by the NY office blackouts caused by Hurricane Sandy. It was worth the wait however as the 110-second 720p clip gives the broadest glimpse yet of the sheer scale promised by this latest installment.
With the knowledge that the game will follow the struggles of not one but three playable characters, we get some quite neat vignettes suggesting how their stories might evolve and interlink. First there’s the drug-addled gun running redneck Trevor Phillips, who lurches from boozy bar room brawl to torching a house with a Molotov cocktail. We then meet a pair of more streetwise black characters including Franklin, a guy who seems keen to swap his life as a neighbourhood repo man for something more lucrative. Imagining how just these contrasting players will cross paths is intriguing and reinforces a plot that pits an unlikely criminal team together for a series of haphazard heists.

The trio of central protagonists is completed by De Niro-alike Michael who serves up the trailer’s opening monologue – something gorgeously cliched about “being in this game for too long”, “getting out alive” and “take my advise and give up” etc, etc. Cue the lemon sucking pouts and prayer hands folks. What’s nice here is that Rockstar has clearly adopted a pathos inspired by movies like Analyse This or indeed TV shows like The Sopranos, with the suggestion this character has to reluctantly work alongside his idiot son James during certain missions. There’s some amusing dialogue to illustrate this and even a dash of slapstick action to watch out for involving a freeway-flailing sailboat. GTA has always kept things firmly tongue in cheek and it’s reassuring to see this trademark humour forming such a charming narrative cornerstone within the eventual release.

An important final character in these games is of course the world itself and we already know that GTA 5’s interpretation of Los Angeles will dwarf several previous Rockstar offerings combined. This trailer offers some tantalising shots of arching freeways, downtown skylines, dusty ranches, rivers, gargantuan bridges, rundown ghettos and what appears to be an epic rendition of Venice Beach. All of these locations are teeming with virtual life, traffic and the promise of unprecedented interaction. Anyone who has been fortunate enough to visit LA for real will recognise the varying aesthetics captured and indeed just how sprawling this metropolis should be. Quite how they’ll fold the paper map into the game box is anyone’s guess.

When it comes to that other big seller in GTA, the cars, there’s the welcome addition of officially licensed motors for added realism. This trailer seems to focus on the Audi models when it comes to recognisable appearances, which look adequate, but there’s such a wide variety of wheels to steal off those roads that it seems inconceivable your old unlicensed favourites won’t also feature. In fact by the looks of it you’ll probably be too busy with the trucks, buses, bikes, boats, trains, planes and helicopters to worry about what badge is stuck to the ‘fender’. There’s a particular moment when you seemingly missile down a chopper with what looks like an F-11 fighter jet and you just gawp at the possibilities.

The musical backdrop for all this carnage is provided by Stevie Wonder’s 1987 electro-funk classic ‘Skeletons’, which just fits from the first beat. If Rockstar manages to tap into the right vibe as far as the full soundtrack and in-car radio goes, GTA 5 could be a return to a top form unmatched since Vice City. When they unearth forgotten gems like this and relentlessly pump them into your skull, its inevitable you will be forced to buy the lot on iTunes. Stevie says thanks for the royalties already.

We’ll finish by remarking on the general presentation, which is dominated by those true high definition graphics. The trailer is undoubtedly strung together by cut scenes, but everything looks as characteristically stunning as you would expect. Environments appear detailed while character models also seem well animated, although it’ll be interesting to see how aspects like lighting, shadow and texture eventually perform under closer in-game inspection. The smattering of voice acting once again is polished and believable, which really has been a triumphant hallmark of the GTA series so the omens are good.

What are we looking forward to most from the trailer? Well it has to be the prospect of the side activities, which by the hint of a court at the very start would suggest playing tennis. Yes, the idea of an online knockabout that could descend literally at any point into an Uzi-fuelled death match is enough to induce full body stasis until next Spring. New balls please…