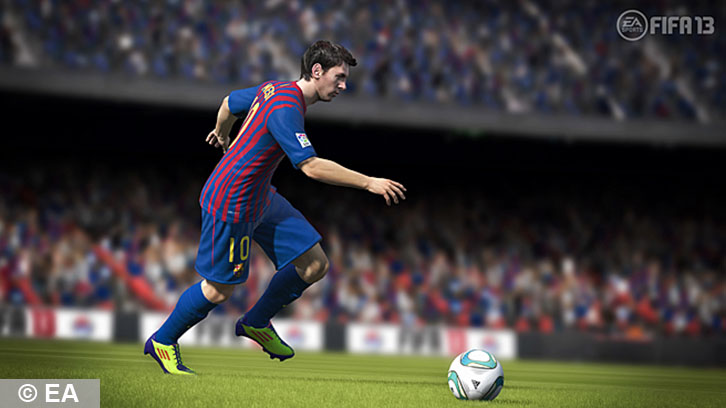 In a quick update to an earlier post regarding pesky bugs for FIFA 13 on PS3, its seems EA has now posted a patch that offers a fix… yeyyyyy! (insert applause here)

Ok so it’s early days and I haven’t fully tested FIFA 13’s update version 1.5 but it appears to have solved the crippling gameplay problems many experienced at the start of the year.

To recap, there seemed to be a conflict on certain PS3 models with the FIFA 13 1.4 patch which would slow matches to a crawl. Somewhat curiously it would only manifest when initiating any variety of online match and would subsequently apply to offline games also.

The slowdown wasn’t a mere annoyance but in fact resulted in an unplayably realistic simulation of an interstellar hoofabout. It was frankly so cantankerously sluggish we dubbed it the ‘Victor Meldrew’ mode.

Additionally my own experience of the problem would brick the console on game exit, requiring a unique form of hard reset I’ve never encountered before. Thankfully FIFA 13 could then be restored to normality for offline matches only by deleting the offending patch and starting again.

Hence an enforced period of rest for my FIFA 13 exploits ensued, only this evening becoming aware that a sparkling new update version 1.5 had arrived.

With the fresh patch applied and an online Head to Head match kicked off, it became clear that Victor Meldrew mode was no more. The match ran at full speed for the full 90 minutes and my Newcastle United team could happily batter the England national side nil-nil. That’s no joke folks, England ‘keeper Joe Hart had a blinder.

Perhaps predictably EA did not list this particular problem fix when the update was first released on February 12th. In fact it doesn’t appear to be described in its public update logs at all, but whatever has been done has worked.

The point is that all appears to be well again and I therefore owe a congratulatory thanks to EA. I was understandably scathing in my initial blog post regarding this issue and it must be said that EA has had its hands full with a myriad of publicised FIFA 13 problems. My ranting wasn’t unfounded.

However I’m pleased the issue has been acknowledged and everyone who was suffering the problem can breath a sigh of relief. Let’s face it, FIFA 13 without online play is only half a game!