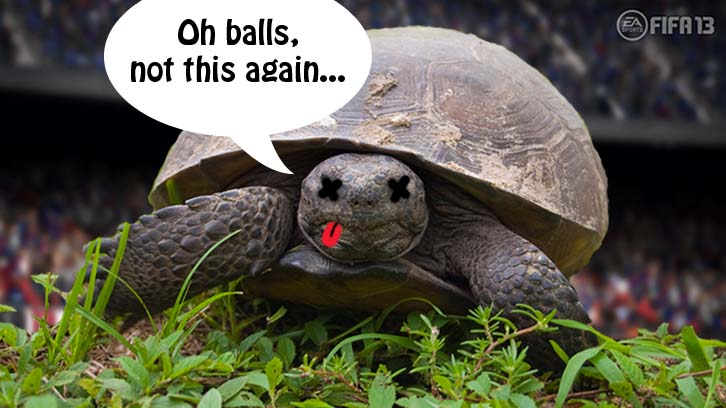 FIFA 13 has been as criticised for its reliability as it has been heralded for its gaming prowess. The best football game in the world is frankly broken and I’m now just another disgruntled supporter.

I’ve been a devoted FIFA fan and customer for at least the past four major releases. For a while previously Konami’s Pro Evolution Soccer had them licked, no doubt, but makers EA upped its game and literally has refined a winning formula.

A big part of this has been the online features, including Head to Head matches and of course the very profitable FIFA Ultimate Team (FUT). However with this expansion of functionality comes a heavy burden when it comes to synchronising playing experiences for a huge pool of players.

With FIFA 13 expected to run robustly across a multitude of models between PC, Xbox and PS3 – ensuring faultless performance constitutes a massive, unenviable task.

Boo hoo frankly EA. We are talking about a multi-million dollar franchise here folks. A game that is a worldwide number one smash with every annual iteration.

If the job has become too big for EA then it’s time to go back to basics and deliver a product that is fit for purpose. For a bewildering array of players, FIFA 13 just isn’t.

Disappearing footballs, AWOL players in FIFA Ultimate Team (frankly to be expected if you’ve bought Carlos Tevez) and pre-match loading freezes are just a sample of the reported problems. In the UK FIFA 13 has been a regular fixture on BBC’s Watchdog consumer complaints programme, such is the level of frustration.

Until December I was oblivious to what all the fuss was about. My brief dalliance with FUT had expired long previous when I realised you had to worry about player contracts.

And then the recent 1.4 ‘update’ arrived, apparently designed as a solution to everyone’s woes.

I should stress here that these updates or patches aren’t optional if you want to play online. You are literally forced to install them to enjoy the game you have purchased to its maximum, whether you know them to help or in fact hinder.

Ever since update 1.4 my game, on the PS3, has gone all slow motion. And I mean seriously slow, abnormally so. Imagine eleven Neil ‘Razor’ Ruddock‘s coming out of retirement to play a charity match on a zero-gravity planet coated entirely in treacle. Kicking an ME-afflicted tortoise with barbed wire boots. The subtext being is it is bloody slow.

Delete the patch and you’re fine, until you go online to play a match of any kind and Razor’s grabbed ‘sparky’ again.

Mine also has the helpful problem of bricking the console when you get so fed up you choose to quit the game entirely. Instead of switching back to the PS3 XMB menu it just goes black. The only way to revive comatose system being a 2-minute hold of the power button.

“Delete the patch and you’re fine, until you go online to play a match of any kind and Razor’s grabbed ‘sparky’ again.”

At least it would seem I’m not alone. Scan the forums and even Youtube, you’ll find those with similar problems across all FIFA 13 formats.

So surely EA are falling over themselves to sort this out? You’d think, but no. The wall of silence is tangible and it appears that we’re expected to sit tight and wait for the next update to fix the last.

Don’t get me wrong, I’m so pissed because a working FIFA 13 is a fantastic game. Online it is one of the most addictive and enjoyable multiplayer experiences you can get. But if ANY game comes with the price of bug after bug, it simply cannot be taken seriously as a legitimate product.

Are you suffering from similar issues with FIFA 13? Leave your comments and details of particular problems below…