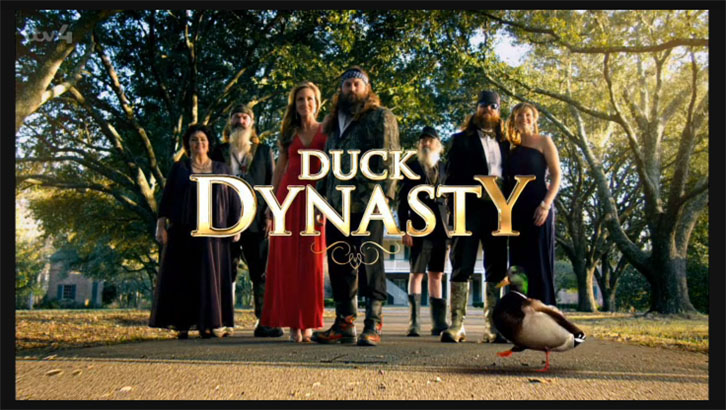 The researcher notes for the aborted Who Do You Think You Are? ZZ Top special done got their own purrty little telly show. Equally troubling, Duck Dynasty is effing great…

Duck Dynasty is a smash-hit US ‘reality’ show following the fortunes of an unorthodox family business. Set in West Monroe, Louisiana we’re given behind the scenes access to the work, and largely work avoidance, of the Robertson’s – chiefly dad Phil and his sons Willie and Jase.

These are the men behind Duck Commander and the imaginatively named Buck Commander, the bambi-slaying side brand. Needless to say, if they ever branch out into a range of marital aids the trademark office is in for an awkward afternoon. Unlikely though admittedly – the only sexual gratification this lot associate with a ‘rampant rabbit’ would be in shooting its furry face off.

“The only sexual gratification this lot associate with a ‘rampant rabbit’ would be in shooting its furry face off.”

If I say “they’re coming right for us!” South Park fans will at least immediately form an accurate mental image. These are beardy, camo-clad fellas who love nothing more than drinking, fishing, drinking, humping, drinking and erm, praying in accordance with their devout Christian faith. Real men basically.

So what do they actually do? Well a qwiki search reveals they make what are referred to as ‘duck calls’. Being the deep south I reasoned this to be some sort of premium rate chatline service for the lonely outdoorsman. “Ooh yeah, that’s it show us your quack”, “Got duck sauce everywhere”, Seek BILL payer’s permission before calling etc, etc.
But no it turns out Duck Commander is a $20+ million business empire manufacturing whistles. Whistles! Just goes to show how full of silly, pointless hunts America really is.

My snidey exposition aside, the characters of Duck Dynasty are very watchable and provide the heart of the show. In all seriousness to have enjoyed the successes they have, this is a far savvier bunch of rednecks than they would have you believe. More than that though they are genuinely funny. Episodes are the usual goofy set-pieces this genre of programming is built on of course, but this is a family with natural performance instincts and crucially comedy timing. My own favourites here are the acerbic brother Jase, but the more obvious and yet surprising star is uncle Silas ’Si’ Robertson, a 65 year-old Vietnam vet. If somebody doesn’t hire him to replace Robin Thicke in a reboot of the Blurred Lines video, I’ll think of something else.

To be fair everyone in it exhibits flashes of charisma but ultimately warmth. You are happily compelled to like this family and overcome initial preconceptions. I’m so convinced I’d get along with them I visited duckcommander.com, carefully, for current vacancies despite knowing full well my CV is woefully bereft of adequate facial hair.

These are the key reasons why Duck Dynasty wins out from obvious TV cousins (cousins that are also spouses) like Lizard Lick Towing and the grotesque Here Comes Honey Boo Boo. Nobody is being exploited, you’re laughing with these guys rather than cackling cynically at them.

Woefully behind on discovering this transatlantic gem I might be, but Duck Dynasty, Season 3 is on ITV4 Saturday nights and ITV Player. By next weekend I’ll be sick of it but until then you’d be quackers to miss it! <sigh>