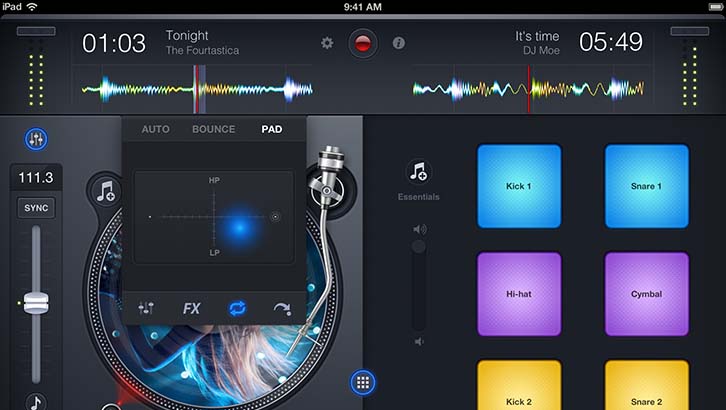 In many ways DJ-ing apps are amongst the very best at encapsulating all that is holy about touchscreen devices. There has certainly been a fair share released across iPhone and iPad, with that idea of physically manipulating digitised music proving too cool to resist. With mobile music production suites evolving to such sophisticated levels, developer Algoriddim has thrown down an ambitious gauntlet with the latest upgrade to its djay series. Indeed djay 2 promises, and delivers, some of the most innovative graphical feedback for an app of this kind. Mixing tracks and synching songs becomes more about following actual audio waveforms, colour-coded to identify drums and instrumentation as well as song structure. These tools naturally excel on Retina iPads, but overall the general interface and presentation is so refined you’ll look for excuses to use it. The app won an Apple Design Award in 2011 and it’s no surprise, doubtlessly reaching the high standards of Apple’s own iPad software. A new slideable UI also lets you literally ‘turn the tables’ and remix the workspace, reconfiguring record decks the way you want.

The app won an Apple Design Award in 2011 and it’s no surprise, doubtlessly reaching the high standards of Apple’s own iPad software.

Most breath-taking here is arguably the virtual vinyl, which believe it or not, feature simulated grooves based on the selected track. This kind of level of detail might seem superfluous to most, but there’s a tangible sense this app has been made by people who care. By striving to simulate the important sensual experience of DJ-ing to admirable detail, Algoriddim has crafted something deeply compelling. Thankfully this is supported by vastly improved access to your music, providing an ideal catalyst for rediscovering your favourite tracks. Intuitive library access to iTunes plus integration with iCloud and AirPlay means you’re never short of new audio or ways to share your output. Mixes also become more expressive thanks to a built-in sampler, accessed via a bank of colour-coded drum pads. This adds an improvisational element that ramps up the fun factor at least, especially if the pre-loaded samples prove limited. In summary, it’s djay 2’s multi-layered depth that makes it so good. On the surface there’s enough for casual music fans to get a kick out of the novelty factor of mixing up an iTunes library. The breadth of features though is clearly enjoyed most fully by genuine DJ hobbyists and, certainly due to the comprehensive MIDI controller support, professionals. It all then comes down to cost and pitching it to customers at such a generous price point keeps it really accessible to everyone. You won’t be disappointed!

1) HD Waveforms
A waveform layer enables you to graphically interpret the sound, while the Spectral Timeline visually breaks down song composition

Retina-optimised waveform graphics and virtual vinyl keep things suitably organic. Has so much detail, casual users may only ‘scratch’ the surface

The media can be as cruel, bitter and twisted as they want, but #nufc is UNITED in pride and gratitude to have Aman… https://t.co/1Kqbo8yh8Y
- Friday Nov 12 - 1:11pm

It's never too soon to make your first film, so @FXhome is here to guide a first movie shoot with limited resources… https://t.co/rqcw5WgVHS
- Monday Oct 25 - 4:02pm