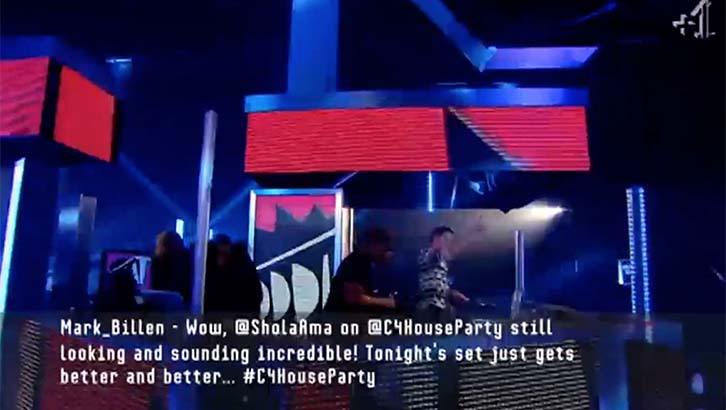 My persistent social media whoring during the excellent C4 House Party NYE finally pays off with a welcome Retweet and live TV appearance.

As my previous post testifies, I am a total buffoon fanatic when it comes to C4 House Party – which marked a second outing for New Year last night. I have now gleefully endured both 6 hour sets, live, without fail and made a real effort to simultaneously follow the official social media outpourings of fellow devotees.

And finally, last night I reaped tangible rewards. Yes, my quest to submit a Tweet to @C4HouseParty deemed worthy of British televisual broadcast was fulfilled. To be precise, it was the very final featured Tweet of the show and timed at roughly 5:45 AM.

So what kind of SMS-sized wordsmithery bestowed me this honour you may ask? Well, it wasn’t my initial flattering comparison of the C4 House Party Twitter girl’s likeness to Neil’s hot sister from TV’s The Inbetweeners. This was clearly, quite rightly, deemed too sleazy and immediately thrown on said girl’s cognitive ignore pile. But there was a theme emerging folks, so bear with me.

No, the Tweet that made @Mark_Billen famous was an attempt instead to chat up one of the vocal guests. So surprised to see UK R&B chanteuse Shola Ama introduced during Toddla T‘s closing set, deemed lost in pop wilderness since her 1997 hit “You Might Need Somebody“, I sensed a hash tag coming on. Firstly, I would stress that the sentiments of my Tweet were 100% genuine – Ama, it transpires, is a goddess.

She wasn’t bad in 1997 to be fair, but last night she looked stunning and sang faultlessly too. Not an easy task to accompany what was quite a spontaneous DJ backing track, shuffle about a bit and still deliver vocally to camera. I’d imagine.

Yeah so there we go, C4 House Party does indeed follow Mark Billen.com (sort of) and very publicly too. Basically because I tiredly decided to try my luck with one of England’s most criminally overlooked female vocalists.

I mightn’t have got her number, but I’ve still had a Tweet put on telly and you haven’t… #BusWankers!