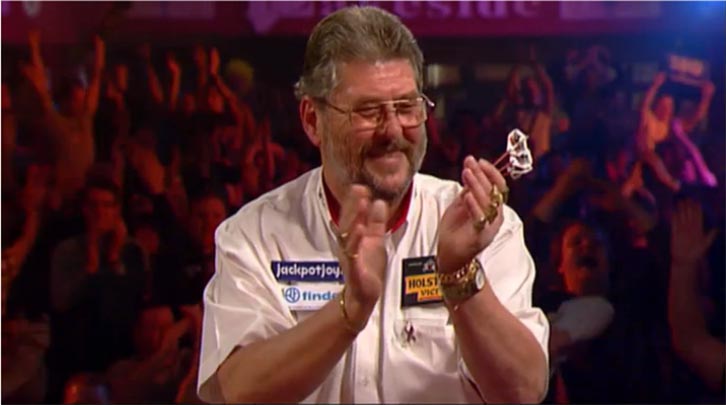 The 40th anniversary of the British Darts Organisation begins tomorrow with the Lakeside World Championships. Here’s a little bit of why you shouldn’t dare miss it…

Like criminally few in the UK, to me it doesn’t feel like New Year proper until the Lakeside darts. I may be something of a late convert but the ‘sovereign dropped’ eventually and I’m now a full-on armchair groupie.

NB: Albeit aided by the depression of the post-Christmas return to work, culminating in telly-glued reclusion for the first weekends of January.

But less tragically, I think it was the 2010 final that did it for me. That really was one of the most compelling sporting spectacles of any Sunday evening. I kid you not, underdog finalist Dave “Chissy” Chisnall showed the steely resolve of a Swiss Army Knife. He hit more doubles than a rogue sniper at a lookalike convention. As they might say in darts.

He lost, but that in so many more ways made it an enduring and poetic performance. Well worth missing Antiques Roadshow for.

Anyway, it all kicks off again tomorrow with top throwers like Tony “Silverback” O’Shea, Stephen “The Bullet” Bunting and Scott Waites hopeful of lifting a maiden Lakeside title. By the way, Scott doesn’t yet have a brilliantly absurd nickname so perhaps we’ll start a suggestion stream in the comments below.

All the guys (and gals) are great fun though and their personal drama during each match really is tangible. As the camera flashes between Oche and respective screeching WAGs, you really do feel for them up there.

However much of what makes Lakeside darts so great is the venue itself, coupled with the extensive mainstream coverage. It’s the closest thing we’ll ever get to the BBC Sport team covering a meat draw at the Phoenix Club.

You laugh, but It can prove a pretty rowdy room and Colin Murray handles MC duties superbly. Shabba!

But there’s an earthy accessibility to this BDO event that takes a ‘flighted pin’ to the pomp and glitz of the PDC World Championships. They say it’s about money but it’s just all too outside the comfort zone for Phil “The Power” Taylor and “Barnie” van Barneveld.

“Everyone knows fat people have better personalities Aunty, so think on for next December…”

Oh yeah and BBC, where exactly were the darts nominees for SPOTY 2012? The ceremony was so stultifyingly dull that three times Lakeside champ Martin “Wolfie” Adams would have wiped the floor. Probably literally, just to be invited. Everyone knows fat people have better personalities Aunty, so think on for next December…

Ted Hankey, aka ‘The Count’ (careful), dons a Dracula cape and throws rubber bats at the audience. I mean, hello!!?? Pedal your way out of that one Wiggo.

“Yeah but it’s not a sport is it, it’s a pub game.” So?? If it wasn’t for boozers and Sky Sports turning football, rugby and cricket into ‘pub games’ they’d go bust. Most punters would prefer it if Premiership pitches were relaid inside their local Wetherspoons anyway.

Lakeside darts from Frimley Green starts Saturday January 5th, with daily coverage across BBC One and BBC Two for the next week.