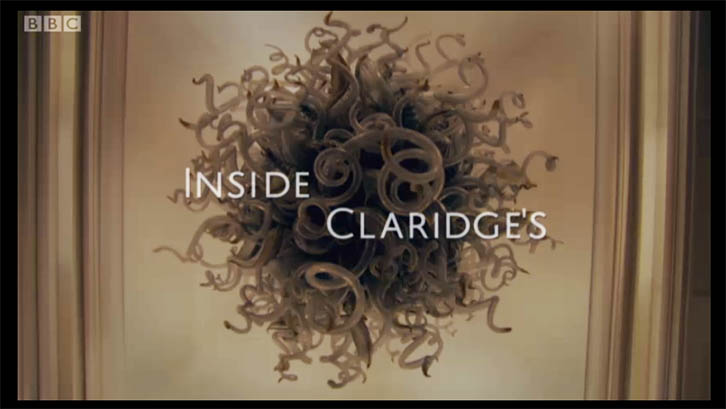 Slouch about in your pants while watching rich people get waited on hand and foot. Art Deco meets docusoap in the BBC’s reality-based reboot of Hotel Babylon…

I’m ashamed to say BBC Two‘s Inside Claridge’s passed me by during its maiden December run. Luckily with New Year catching the TV schedulers off guard it appears to be on constant loop, at quite baffling times. So I’ve now seen the first two episodes at either end of a single day and become hooked.

Claridge’s of course is Mayfair London’s most famous crash-pad for the great and good, with global celebrities and royalty regularly checking in. The hotel has been in business for over a 100 years and charges quite staggering prices for a slice of bygone “glamour”.

This is the main allure of the show really. Gawping at Joan Collins as she attempts to explain why glamour at £5k a night can in any way be justified. To be fair to Joan, she refreshingly admits that Claridge’s is ludicrously expensive – but only in the way that everything is too expensive these days. Everything apart from Snickers.

But at least she’s more philosophical about it than US fashion designer and gravel-voiced QVC botherer Dennis Basso. In episode one he’s quizzed rather profoundly by the film crew whether luxury is proving tougher to celebrate in today’s times. “You know…” Basso drawls uncomfortably. “There’s always going to be…” He pauses thoughtfully. “Luxury.”

Thankfully the extortionate rates should mean the army of 420 staff are rewarded. These people are effectively leisure soldiers, so borderline OCD you wonder why they let any guests in at all. Perfection isn’t left to chance and the stories these staunchly loyal employees share to camera can be pretty heartwarming.

The central personality here however is the General Manager, an affable German named Thomas Kochs. Snigger, snigger. He’s clearly auditioning for the hotel equivalent of Airport‘s Jeremy Spake, and if ever spoofed then let’s just say David Walliams is a shoe-in.

“Perfection isn’t left to chance and the stories these staunchly loyal employees share to camera can be pretty heartwarming.”

There’s a great sequence in episode two where he and colleagues are tasked with choosing new bedside alarms for all 203 rooms. It really serves to illustrate how much attention to detail and admirable care goes into a very difficult job. Not to mention an excuse to show Kochs fondling clocks. What??

It’s a shame really that we couldn’t catch him in the midst of some minor mishap, or have him guest as head butler for the day. Purely for the juvenile prospect of some senile old heiresses limping through the hallowed halls protesting “Fetch me Kochs at once, I demand to see Kochs this instant!”

“Yes m’lady you’ll always find Kochs at the end of a bell”… I’m sorry, that’s the last one.

But even in this backdrop of five star decadence there remains something of the Basil Fawlty about Thomas, which is endearing. You suspect that if you did happen to mention the war, he’d apologetically tend his notice before politely punching himself.

All in all it’s compelling fluff, summed up by my favourite anecdote from the programme. It’s during episode one and a Claridge’s marketing trip to New York, visiting some poncy uptown travel agent. These lot only give you their phone number for $100k but will speak candidly about trips they’ve arranged for wealthy clients.

One request involved them hiring a frogman to manually attach a live catch to some millionaire’s flaccid rod during an African fishing holiday. As an unwitting present from his wife! It’s either just a misguided gesture of love or THE definitive personification of modern emasculation.

They never disclose, but who bets it’s another Tom Cruise secret the Scientologists are sitting on?