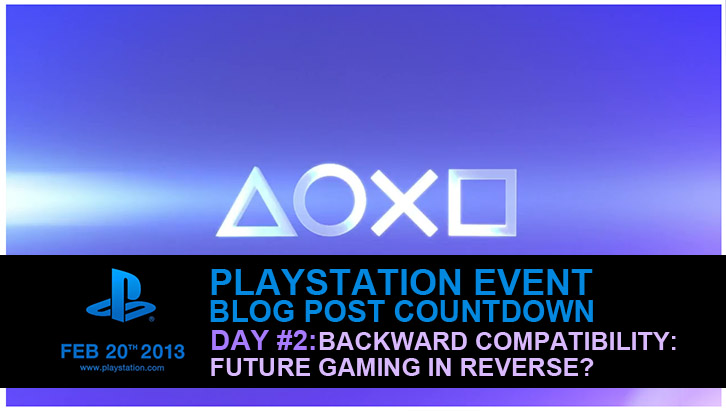 How much importance should backwards compatibility really have when it comes to reshaping the home video game landscape? In the build up to a new era for PlayStation we examine if your old games really should matter to the next console generation (Part 4).

So where does all that leave us? Well, regarding the launch tomorrow we have a few clues to suggest that backward compatibility will exist for PS4 in some form.

It is extremely likely the machine will integrate a Blu-ray disc drive. However it’s feasible a disc drive could or eventually become an optional extra as download delivery becomes more prevalent. This would certainly drop manufacture costs if Sony wants to pitch the machine more affordably at launch.

If internal storage therefore becomes more vital, we might expect Sony to stick with the expandability PlayStation 3 gamers have enjoyed. That ability to swap in mammoth laptop-sized HD units of any brand has been clever, so perhaps extending that to cover Solid State Drives would offer helpful speed gains.

“The system is unlikely to read and load PS3 discs and for sure you can safely forget about it accepting any PS2 or PS1 ones.”

PlayStation 4 WILL also feature backward compatibility of software in some way. The system is unlikely to read and load PS3 discs and for sure you can safely forget about it accepting any PS2 or PS1 ones.

A streamed service based on Gaikai’s network seems inevitable and this might even stretch to cover certain nextgen releases too. Hopefully this will enable Sony to offer a more pocket-friendly pay as you play approach to accessing titles you’ve already bought and owned on disc.

The current model of paying a flat fee to download the whole game code to store and locally install is clunky and needs rethinking, especially for firing up old games.

But what about the wider point on backward compatibility and its validity? For me personally, it should never be given priority in a prohibitive way. A move between generations of technology should push the envelope as much as is possible or commercially viable.

Customers want to be wowed and will pay the price for innovation. The past is retainable in numerous ways for those who want to revisit, but in gaming the excitement is always in evolution.

Learn from what has gone before, acknowledge it, celebrate it by all means. However if this in any way hinders the potential to grow it’s not worth it.

By the same token, if you’re just not ready for PS4 yet then you’re not obliged to take the nextgen step yet. Let’s not forget that the PS3 is far from dead with a year’s worth of exciting releases on the way.

In conclusion, backward compatibility arguably lies as much with the choices of technology adopters as it does with manufacturers.

What do you think – is backward compatibility in gaming that important and what kind of support do you hope for from PS4?