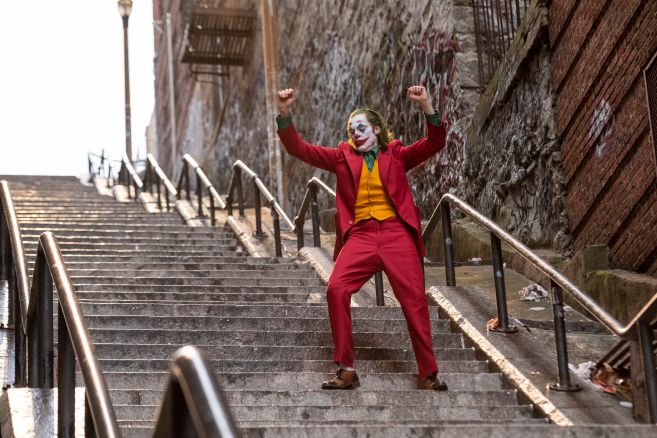 100% SPOILER FREE: Two days ago I went alone, Arthur Fleck-style, to watch the new Joker movie. Before I attempt to review the actual film in any other posts, I wanted to comment on some background.

Firstly, despite being a lifelong fan of comic book art, I’m not keen generally on the contemporary fascination with comic book to movie adaptations. But as an adult I tend to appreciate most the darkness that DC’S Universe and Batman predominantly imbues. That said, my choice examples in this genre are probably Sin City and 2009’s Watchmen – which tonally at least, speaks volumes. [Oh and I’m spoiling nothing by saying both are considerably more violent than Joker, btw.]

Excited by the immediately refreshing angle the production seemed to be taking – It looked beautiful.

However I have admired Joaquin Phoenix’s career and was excited by the Joker trailer when it initially landed on YouTube. By accident or recommendation I found it and watched it, probably most out of cynical curiosity. Had I known then it was directed by Todd “The Hangover” Phillips, my cynicism might have overruled. But I was pleasantly surprised and on repeat viewings actually excited by the immediately refreshing angle the production seemed to be taking. It looked beautiful and dare I say, interesting… “Could this be an artful Joker?” [I asked, silently]

Earmarking its release purely as what I prayed might be a “good film” and without ANY other information, I waited patiently. I don’t follow anyone else’s opinion or instruction on what to think on anything, least of all social media. And if the news hates something or wants it banned, it’s the best advert for piquing my interest or support straightaway. Be inquisitive folks – think for yourself and not any warm fuzzy echo chamber. [Go see Joker and internalise it, because you are only depriving yourself of great art otherwise.]

I don’t follow anyone else’s opinion or instruction on what to think on anything, least of all social media.

So I was utterly oblivious of the hype, the cultural noise surrounding this film. My first hint of any controversy or negative spin around it was on eve of release, from my sister. From what little she repeated, I could only deduce a somewhat lazy association with The Dark Knight Rises and the Colorado shootings it was linked to. This seemed as tenuous to me as the theory did in 2012, but it’s only after watching Joker that I’m learning how much further the buffoonery goes.

Apparently this new “outrage” and “offence” runs deeper, or as deep as the people believing or spreading such garbage can get. Have you people never seen Martin Scorcese’s 1976 classic Taxi Driver? Did you believe the morons in 1971 that drove Stanley Kubrick to ban his own A Clockwork Orange – and swerve that too? Both works are clear influences here, granted, so it’s quite likely you just don’t like movies much. Or video games like Mortal Kombat or even, heaven forbid, Night Trap? Because in an age when we are being force-fed sanitised mediocrity that sticks to message, steers political agenda, controls collective thought and primarily, our economic habits – let me assure you, we NEED more Joker.

In an age when we are being force-fed sanitised mediocrity that sticks to message, steers political agenda, controls collective thought and primarily, our economic habits – let me assure you, we NEED more Joker.

You can love it or you may hate it as a FILM, nothing more or less. But do not be swayed or scared away from thought provoking art by the Twits, the extremists, the virtue seekers, the sleepwalking wokers… and be your own judge. It may be to their chagrin, but a worldwide gross so far of $0.56bn (Half a BILLION) is a justified, freethinking triumph. Who’s laughing now?